In February 2011, as a result of heavy bleeding, I went to my GP who subsequently referred me to a Gynaecologist. I had a hysteroscopy examination and a biopsy, with the results indicating that my womb lining had become thicker, but no further treatment was required and I was discharged. After the initial bleeding you get following this procedure had stopped, I never had another period again.

In August 2016 I suddenly noticed some ‘spotting’ which alarmed me as I had not had a period in five years, but as it was so slight and only happened that one day I didn’t initially go to my GP. Approximately 3 weeks later I noticed ‘spotting’ again and instantly knew something was wrong.

I immediately made an appointment to see my GP but I was seen by Practice Nurse who merely tried to re-assure me that ‘this happens’ to women during menopause. I questioned this as I hadn’t had a period for 5 years so had clearly gone through the menopause. Something was clearly wrong.

The nurse took blood samples but when I went back for results one week later and I was simply told that I was going through the menopause. This could not possibly be correct? I had clearly already gone through the menopause, 5 years without a period and then to suddenly start bleeding was clearly not right. I didn't feel matters were being taken seriously and at this point I insisted I was referred to the same Gynaecologist I had seen several years earlier.

Five weeks later I met with the Gynaecologist and a further hysteroscopy was arranged for 3 weeks time. The procedure was completed and I was told I would get my results in 6 weeks, however, just 2 weeks later I received a call asking me to return to the hospital but to see a different Gynaecologist and that I should not come alone. Clearly there was something terribly wrong. I had 4 days to wait before the appointment, in that time I could not eat, sleep or barely speak I was frozen with fear, my mind was unable to rest, I just knew.

Once at the appointment the Gynaecologist asked “Do you know why you’re here?"   No one had told me anything, but I replied… “Because I have cancer”  to which he replied “Yes” ………

I was told that the test results had shown that I had Endometrial cancer stage 1.  I was told I would need a total hysterectomy to remove everything including ovaries, by doing this they hoped to be able to remove the cancer completely.  Hearing those words is the worst thing that can ever happen but at the same time, in my soul, I already knew.

My heart broke having to tell my family, I wanted to keep this from everyone, once you have told someone you can't take it away and I just didn’t want to bring such pain and worry to the people I love so much.

I was referred to Liverpool Women’s Hospital where I waited a further six weeks for surgery.

Those six weeks felt like an eternity, after all the months I had already been fighting to get this taken seriously, it couldn’t come soon enough. Every day that passed was another day this cancer was growing inside me and I needed to get it out fast.

I spent every spare moment researching immune boosting foods and recipes and made these predominant in my diet, doing everything I could to give my body the best chance.  I continued to work as normal and as the weeks passed it all felt a bit surreal. I was carrying on as if nothing was happening.

I felt like I should be doing all the things I've ever wanted to do, visiting all the places I've always wanted to see, but I wasn’t. I was just still working as if nothing had changed. So much time had already been lost at GPs appointments etc I felt like time was running out, I needed to do something and fast, so I just kept calling the hospital every few days in the hope of getting seen sooner, there was simply nothing more I could do.

The day finally arrived and I had Laparoscopic surgery which went well. I was in hospital for 24 hours then discharged to return in 3 weeks for the results.

It was a very strange time, I found it difficult not being able to do even simple everyday things like getting showered and dressed. I had to stay with my sister as I simply couldn’t do anything for myself.

As the weeks went by I was gradually able to do more and more things for myself, all the time feeling relieved the surgery was over, yet all the while worryingly aware of the results still to come.

Three weeks later I returned to the hospital I had been dreading this day, but, I had done everything I possibly could so far and whatever the outcome I had to know.

My results were positive I was advised that the surgery went well and that the cancer hadn’t reached the muscle, therefore, no further treatment was required.

This was the best news I could possibly have hoped for ever and a huge relief, yet a certain little part of me felt like it was all just too good to be true.

Maybe, after worrying so much, for so long, it takes a little while for those feeling to fade and to allow yourself to believe that maybe, just maybe, you have been very, very lucky.

Without a doubt, I owe everything to the outstanding team at the Liverpool Women’s Hospital. The Multi Disciplinary Team are second to none.

My surgeon Mr Kirwan, to whom I owe my life and specialist McMillan Nurse Dawn Valentine-Gray to whom I owe my sanity (what’s left of it) are truly amazing people, their sincere kindness, care, understanding and humour have made everything bearable.

Over the next three years I continue to have quarterly check ups and so far I am told everything is good. I am now back at work full time and doing everything I used to do before and more.

I still can’t quite believe what has happened and that I have a second chance at this wonderful life.

In an attempt to show my sincere thanks I am currently raising funds to support the Gynaecology Oncology Unit and their groundbreaking research work.  I recently took to the skies in a sponsored Wing Walk raising £655 towards my £1000 target and plan to abseil down Liverpool Cathedral.

In truth, no amount of words or funds can express my sincere gratitude for the life saving work carried out by these truly inspirational people to who I owe my world! 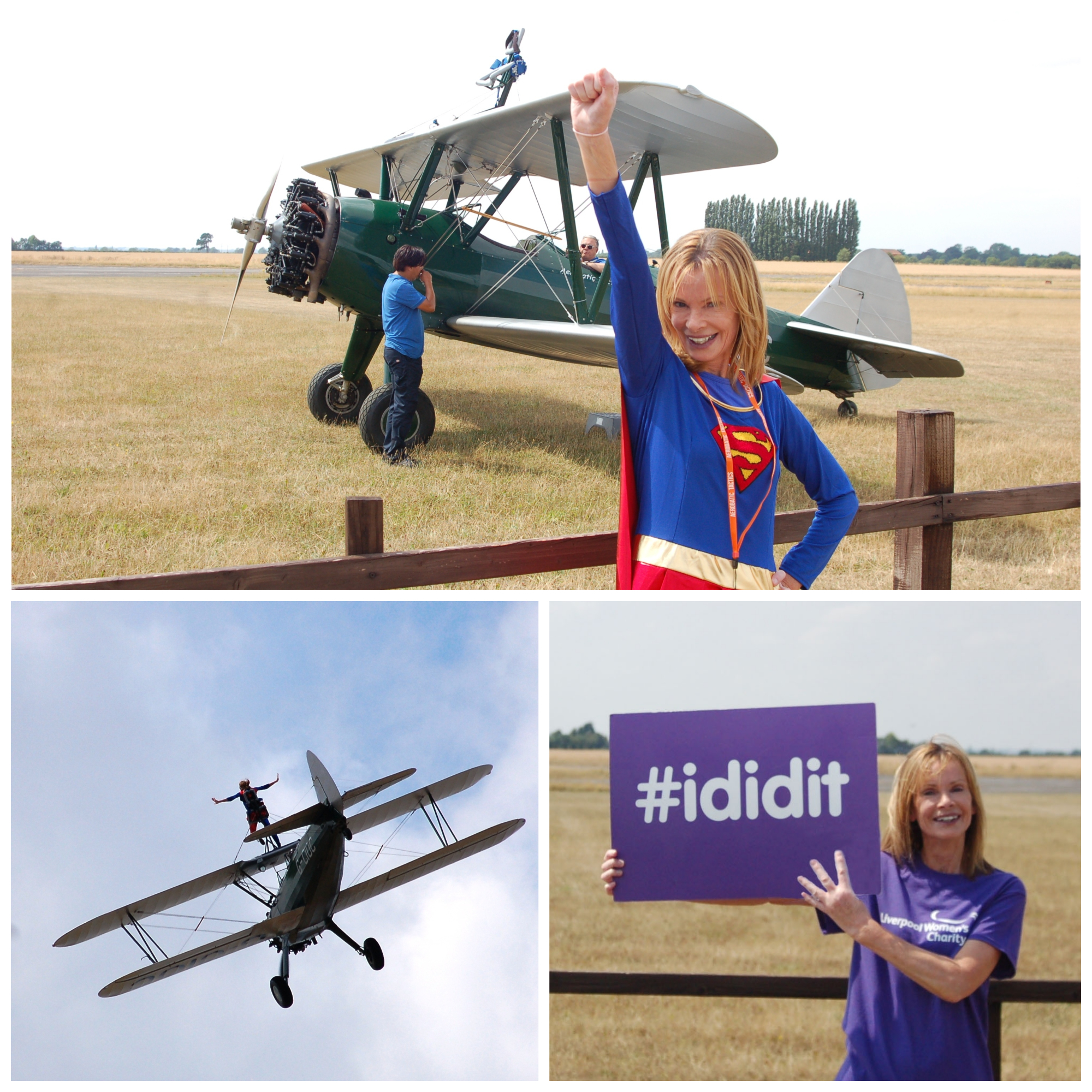