My Name is Kate Sharp, I am 32 years old and my partner Andy Green is 27 years old.

Andy has a lovely son called Ethan who is 9 years old.  We had our first child together on the 18th August 2015, with a very easy pregnancy came a healthy baby boy, exactly one week over his due date weighing 7 lb 3.5oz called Finley.

Just after Finley’s first birthday we found out I was 7 weeks pregnant😄.

At around 9 weeks pregnant I had chronic tummy pains and was taken into Liverpool Women's for an emergency scan.

Our hearts sunk as we thought the pain was a miscarriage, to our surprise the scan showed we were having twins, both were absolutely fine, both hearts beating and we were told they were in separate sacks with their own placentas

The Maternity Unit was fantastic, kept a very close eye on the twins all through the pregnancy with regular midwife appointments and scans.

On our 20 week scan we had heartbreaking news. We found out that twin 2 had a heart condition called TGA – Transposition of the great arteries. This meant he needed open heart surgery at Alder Hey as soon as he was born. Doctors assured us that this was a common procedure and that he would pull through. We prepared ourselves mentally and emotionally for this, I knew I wouldn't see my baby straight away after he was born and we had planned as a couple that Andy would go straight to Alder Hey with Twin 2 so he was not alone, leaving me to recover from birth and look after twin 1.  I was booked in for a c section at 38 weeks.

Unfortunately things didn't go as planned  and when I was 30 weeks 4 days I had a massive bleed and was admitted into Liverpool Woman's on Friday 17th March 2017. It wasn't clear where I was bleeding from, both babies were fine and not distressed. I was kept in for monitoring and observation.  Saturday I seemed much better, no bleeding and no contractions. Sunday I had another bleed, this time twin 1 had lost a lot of water from his sack, the bleeding wouldn't stop and my contractions started.

Our twins were born at 30 weeks 6 days by emergency c section, being premature they were so small, twin 1 weighed 3lb and twin 2 weighed 3lb 1oz.  As soon as we saw them we knew what their names were going to be.

Our little fighter we called Dylan, weighing just 3lb 1oz meant he was too small for open heart surgery, Dylan was rushed to the Neonatal Intensive Care Unit, the staff were unbelievable, they tried everything for him, lots of professionals surrounded his incubator, talking to him to comfort him.  They always kept us up to date and the sheer passion we experienced right there was immense.

Our worlds shattered when at 16 hours old Dylan passed away.

The nurse who looked after Dylan just after he had passed was so kind, she stroked his head, talked to him, bathed him and never left his side. She dressed him and made sure he looked perfect, giving him blankets and a teddy. She took photos, hand and footprints as well as offering Andy and I as much time with him as we wanted.

We were quickly introduced to The Honeysuckle Team, the bereavement service at Liverpool Women's, they have been our life support, Marie Austin is our bereavement midwife, not just this she is our friend who has looked after us from the beginning. Without her I don’t know what we would have done. Marie works so hard and is so passionate about comforting parents and being there for them, it’s amazing. When your baby dies it doesn’t mean from that moment they are gone from you.  Marie and her team work incredibly hard, beyond words, to make sure you have memorable times with your baby and help you through these. They talk to you about what happens next, give advice and help with funeral arrangements and organising meetings for you.

They care for your baby, talk to them; make sure they are comfortable and peaceful.  The parents room that they have is beautiful, this is where you can spend time with your baby, it is cosy, warm, lovely music is played, it smells amazing, there are books for you to read, a Moses basket, a sofa. We also bought a plaque to add to this room and we donated our brand new car seat we had bought for Dylan.

Sarah Martin from the Honeysuckle Team, has also been great, she has always offered support and advice, emails me too see how I am, is always there for a cup of tea and chat when you need it.  She works so hard and is a remarkable woman.

Marie told us about the charity service called "remember my baby", which allows you to have photographs taken by professionals, whether this be their hobby, job or passion, all of these workers dedicate their spare time in order to give bereaved families something to treasure.

We chose to have these done and Mark Heymans was an absolute star. Captured the most beautiful photographs of our baby and us as a family.  Before doing so he asked could he touch Dylan, and he looked straight at him and said “hello little man”, he talked to him and made lovely comments to him whilst doing his shoot. Nothing is too much trouble as well, my partner’s passion is motocross and Mark took wonderful photos of Dylan and Andy’s motocross wear.

A few days after Dylan died the Honeysuckle Team gave us a large memory box. Inside was all of his tubes, anything he had touched, the blanket he was lying on in his incubator- still with his smell on, lots of poems, cards, a lock of his hair, a balloon to send to the sky, an angel candle holder, his first tiny nappy, his Vaseline, and there was a key ring and a star necklace in too. A few days after this, one of the nurses left me an envelope. Inside was a few photographs of Dylan she had took - there was him holding this necklace and the key ring. This was a wonderful surprise as we didn't know this had taken place. Really touching.

We named twin 1 : Nate. Nate had difficulty breathing when he was first born and was really poorly.  He was an an incubator unable to breath on his own. He was in the Neonatal Intensive Care Unit for 6 weeks. The staff here worked so hard on every shift and are so caring and loving towards all parents.  Nate was poorly for quite some time, but he began to grow stronger and eventually was tube fed some milk. He learned how to suck from a bottle, control his own temperature and breath on his own.

The nurses  put a photo of a butterfly on Nate's incubator. This is the sign to show that we had experienced child loss and the purpose of this is so all doctors and nurses are aware, so they don't ask uncomfortable questions and also a lot of them were able to say kind words to me from this picture.

The NICU staff made us feel at ease, sometimes I would phone every hour to see how Nate was doing and someone was always ready to talk to me, even at 2am, 3am, 4am. They were reassuring and had an online diary they updated for me to see how he was doing when away from the hospital.

Since being home Nate has had viral meningitis, 4 chest infections 2 of which he needed steroids for and has had trouble breathing so is on a brown and blue inhaler.

He is now much stronger, he is a lovely happy little boy with so much character, he is crawling and always smiling.

I have been a part of the Picnic in the Park for bereaved families, organised by the Honeysuckle Team, which is such a lovely day to all get together and have some fun.  We can’t wait to take part in this year’s events.

The Facebook page that is set up for Honeysuckle parents is a great support, we can privately chat and post photos and remember our babies together, I am very grateful for this page, it reminds us we are not alone and we all stand together.

We have been able to place a 4everlock on the memorial tree in the Liverpool Woman’s Garden.

The Liverpool Women’s have a chapel and at the time, a lovely Vicar called Anne who blessed our boys in the hospital and arranged the most wonderful Mother’s Day service which we attended. She even came over to the Wirral do take Dylan’s funeral.

The work that goes on in this hospital is extraordinary. Words cannot describe how much everyone does, the passion, the commitment, the time and energy they put in, and the 'wanting to help people approach' that everyone I have come across had!

We have tried to support other bereaved parents too - we bought hand knitted octopus’ from a mother who had a stall in Liverpool Women’s who had experienced child loss and we bought plaques and pictures from Joy, at Emma’s joy. As well as being part of many Facebook pages set up by other parents.

In May-June 2017 we set up a just giving page and raised £205 of which went to the NICU and Honeysuckle Team to show our appreciation. The charity leader of the hospital Nadia Alsafaar has been so supportive and we are currently working together for future plans of producing key rings and mugs with our logo on that we have had drawn up by a freelance artist to raise money for the hospital. I have a Facebook page called Dylan’s Day and it is with my passion and sheer heartache that I will fight to raise awareness of baby loss and support those on the same journey. 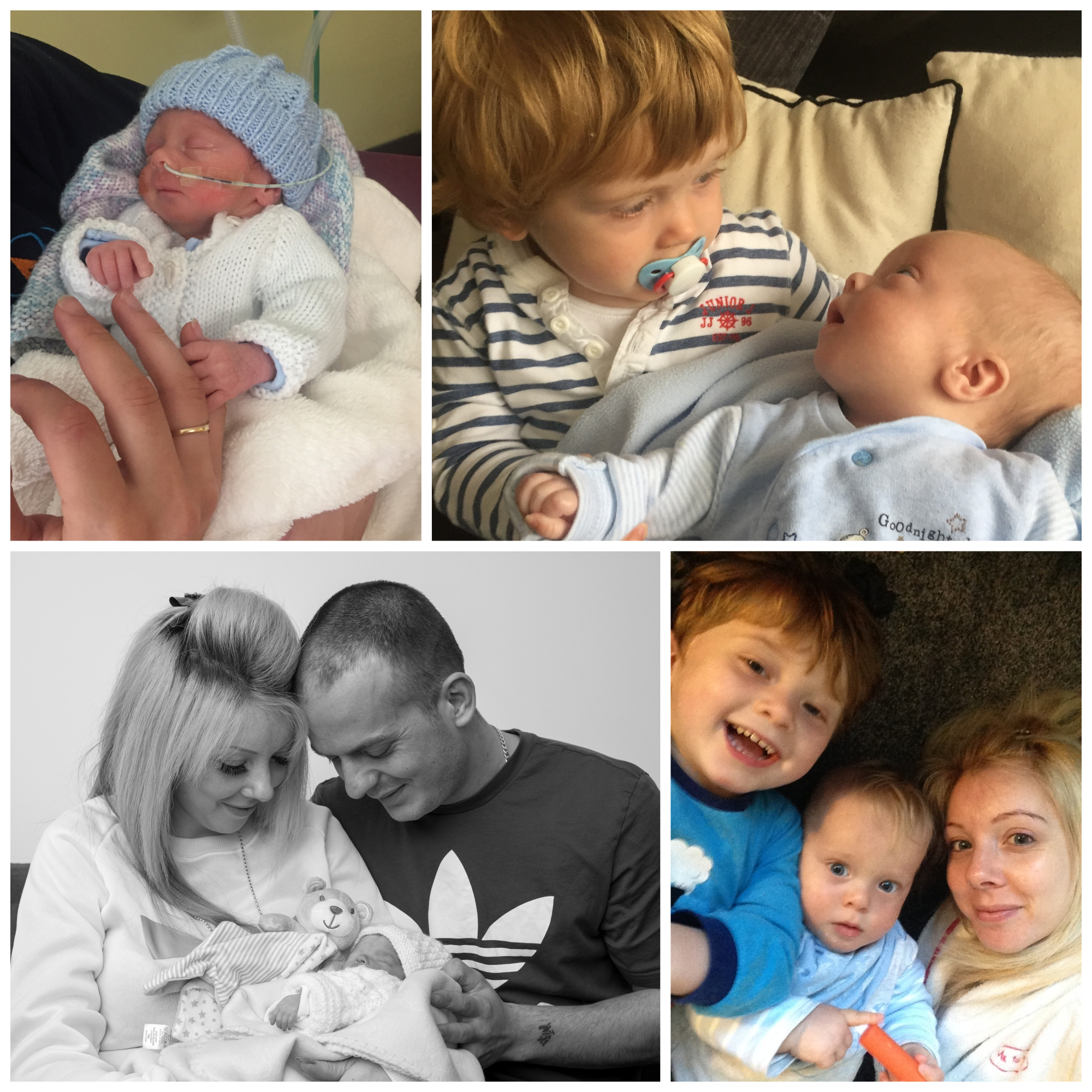