There are over 6000 new cases of ovarian cancer in England every year, and over 3,500 ovarian cancer related deaths. But this needn’t be the case. Knowing what symptoms to look out for can help save lives.

The symptoms of ovarian cancer are:

Here in Liverpool, there are approximately 50 new cases of ovarian cancer diagnosed each year, but because there is no screening test available for ovarian cancer, detecting it can be quite difficult.

Often women are diagnosed quite late with ovarian cancer, as many of the symptoms are put down to other stomach conditions which have similar symptoms. But the later a woman receives a diagnosis, the more difficult treatment can become, so early detection is key. 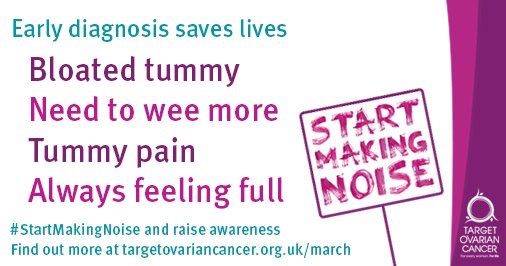 The current five-year survival rate for ovarian cancer is only 46 per cent. However, if the illness were diagnosed at the earliest stage, up to 90 per cent of women would survive for five years or more.

"In Liverpool there is still a very low awareness of what the signs and symptoms of ovarian cancer are, which means that often women aren’t getting a diagnosis and starting treatment early enough.

“The main symptoms of ovarian cancer include persistent pain in your tummy, difficulty eating or feeling full quickly, persistent stomach bloating, and needing to wee more urgently or more often than usual."

"Unfortunately some of these symptoms are very similar to other conditions such as irritable bowel syndrome (IBS), which can make the cancer quite difficult to spot. But the difference is that the symptoms of ovarian cancer are frequent and persistent, whilst the symptoms for other stomach complaints tend to come and go."

"The main thing is that if you've been having stomach pains or feeling bloated most days for 3 weeks or more, you should see your doctor as soon as possible. Chances are it's nothing serious, but it’s important that you get it checked out in order to be sure."

Ovarian cancer tends to occur mainly in women over the age of 50, and usually after menopause, but women of all ages can develop the illness.

If you have two or more close relatives who have developed ovarian cancer or breast cancer, you may also be at a higher risk of developing the condition, so it is important to mention this to your doctor if you are experiencing any symptoms.

Dr Gardner added, "Ovarian cancer can be very hard to spot, but you know what's normal for you, and if you are feeling worried about any frequent symptoms that are new to you, you should talk to your GP."

Nicoli Bowler, 48 from Wavertree, said of her experience of being diagnosed with the illness:

"I was diagnosed with ovarian cancer last year, having already undergone treatment for breast cancer in 2011. I was experiencing abdominal pain, irregular bleeding and persistent bloating – all key symptoms of ovarian cancer.

"After further tests and an operation, I’m now on a course of chemotherapy to help treat the cancer, and feel positive about the future.

"I’d encourage any woman who is experiencing any of the symptoms I had, or having difficulty eating due to feeling full quickly or having the urge to urinate more frequently, to go to your doctor as soon as you can. Don’t put it off. It might be nothing – but it’s best to get it checked out.

She adds, "Spreading the word this March, so that more people know how to spot the symptoms of ovarian cancer, really will save lives."

"Ovarian Cancer Awareness Month is all about making a noise about ovarian cancer in order to help women know how to spot the symptoms early, and give them the best possible chance of beating the illness."

"It’s really important that women talk to each other to spread awareness about the symptoms this March, as well as talking to relatives to find out whether there is any family history of cancers."

"By making a noise about ovarian cancer this March, we can all spread greater awareness about how to spot the symptoms, and help save the lives of many more women in our communities and neighbourhoods."

You can start making noise now by hosting a fundraising and awareness event, or by joining online conversations on social media using the hashtag #StartMakingNoise, or just by starting conversations about ovarian cancer with family and friends.
You can find a lot more ideas and advice about how to do this at: