Rebecca Slater - Downtown in Business Apprentice of the Year Winner

Trainee Pharmacy Technician at the Liverpool Women’s Hospital, Rebecca Slater has won the Downtown in Business, Female Apprentice of the Year award.

Over 350 guests celebrated the achievements of female entrepreneurs and business leaders from across the North West in a gala dinner which took place at Liverpool’s Crowne Plaza Hotel on Friday 9th March.

The award, introduced to coincide with National Apprenticeship Week, recognises outstanding effort and professionalism by a trainee or apprentice in the Liverpool city region and beyond. 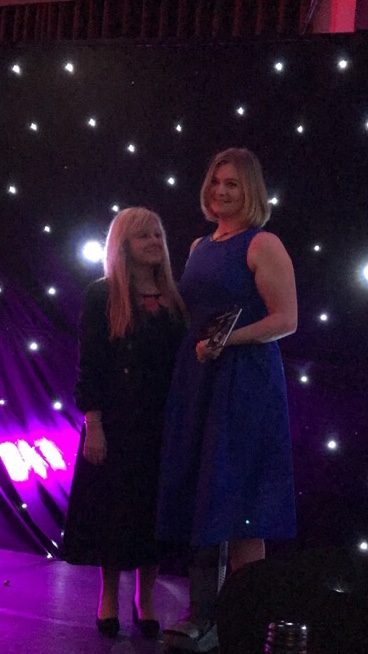 Rebecca received the award in recognition of her tireless work in the Liverpool Women’s Hospital Pharmacy Department. Demonstrating a huge amount of determination and grit to her role at the Liverpool Women’s Hospital, Rebecca has been recognised for her ability to achieve a highstandard as an individual and as part of a team. Rebecca has been described as a huge credit to her college, her employer and herself.

Chief Pharmacy Technician at the Liverpool Women’s, Elaine Willis, said “After only working in the department for a relatively short time, Rebecca has established herself as an invaluable member of the team. Every day she shows her commitment and attentiveness to her work as well as displaying such a positive personality and demeanour. We are overjoyed that she has been recognised in such a way and honestly believe the award couldn’t have gone to a more deserving recipient.”

Rebecca was initially nominated for the award by her tutors at Liverpool City College where she is studying Pharmaceutical Science and Pharmacy Service Skills.

Rebecca was quoted as saying “It’s such a surprise and an honour to be given this award. To be part of such an amazing team at the Liverpool Women’s and study under such fantastic tutors at the Liverpool City College plays a big part in pushing me academically and professionally to do the best I can while also helping me to enjoy the work I do”.

The Downtown in Business, Women in Business award celebrated its 6th year this March. The awards were founded to celebrate the achievements of outstanding women working in both the public and private sector in the North of England.

Downtown chief executive, Frank McKenna commented on the awards: “Every year these awards get better and better. The atmosphere in the room was fantastic and as always these awards demonstrate the huge amount of female talent this city has to offer.

Every day she shows her commitment and attentiveness to her work as well as displaying such a positive personality and demeanour. We are overjoyed that she has been recognised in such a way and honestly believe the award couldn’t have gone to a more deserving recipient