Plans are in place for two victory parades if Liverpool Football Club win the Premier League and the UEFA Champions League Final.

If Liverpool triumph in either competition, the City of Liverpool will formally invite the club to hold a victory parade.

The dates have been requested by Liverpool Football Club.

Please see the following information about the planned routes and take into account disruption that may be caused to your journeys to and from Liverpool Women’s Hospital as a result.

The team which lifts the trophy will not be confirmed until Sunday 12 May (Premier League) or Saturday 1 June (Champions League), however due to the major logistical challenges needed to arrange parades of this scale the announcement is being made in advance so residents and businesses in the city can prepare.

The Champions League parade would take place when Liverpool is already staging two major events – River Festival Liverpool and the Bordeaux Wine Festival - which are already expected to attract tens of thousands of people to the waterfront.

Both parades would start at 4pm, and would see the Liverpool FC team parade their newly acquired trophy on an open top bus, along Liverpool’s UNESCO World Heritage Waterfront.

The route starts at Allerton Maze and will travel north bound on Queens Drive towards the Fiveways roundabout and Rocket flyover. From there it will journey along:

The River Festival Liverpool event would start earlier than advertised on Sunday to accommodate a parade. Details to be announced at a later date.

The parade is expected to attract hundreds of thousands of people, so the city council is issuing key advice for fans and members of the public who may be impacted by the parades:

Motorists are advised that the city centre is expected to be extremely busy, and with this in mind they should plan their journeys in and out of the city carefully.

As crowd volumes increase, it is expected that there will periodic closures of the Queensway Tunnel, as the parade passes close by, and an extended closure of the dock branch exit.

Superintendent Paul White, said: “In the event of the parades taking place there will be a large number of police officers on the streets throughout the city, who will be providing a reassuring presence and making sure fans can enjoy the parades in safety.

“The parade routes have been planned to give residents the opportunity to celebrate Liverpool’s success. Road closures will be put in place by Liverpool City Council in order to allow the parades to take place. This will ultimately cause some disruption to local traffic and public transport routes. Despite this, the intention is to keep disruption to a minimum so fans, locals and visitors can enjoy the events and explore Liverpool safely and freely.

It is expected there will be significant disruption around the parade route travel advice is available at www.merseytravel.gov.uk  to help spectators, workers and residents plan their journeys in advance.

‘Live’ travel updates and alerts will be available from Merseytravel at www.merseytravel.gov.uk, or via the journey planner app, and on Twitter @Merseytravel, #LFCparade

Please see an image of the route map for the parades below: 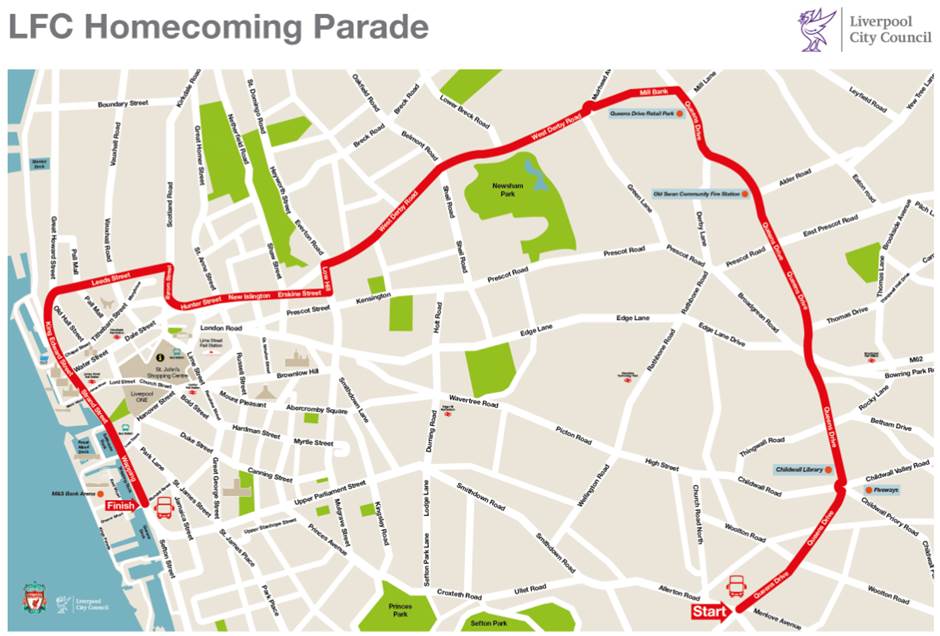