Trust is the first in the Country to introduce pioneering heart monitoring system, described as "a voice for infants who can’t speak for themselves”

A HeRo has arrived on the Neonatal unit at Liverpool Women’s Hospital.  Day and night it will watch over the very vulnerable babies in the unit’s Intensive Care and High Dependency units - and it will save lives.

Extensive research in the United States has already shown that HeRo, a pioneering, early warning heart rate monitoring system, can reduce infant mortality by detecting subtle changes in the heart rate which occur 24-48 hours before any current tests are able to detect something is wrong and long before any symptoms appear.  Liverpool Women’s is the first Trust in England to use it and has the largest system in the world.

The monitor, which is non-invasive and safe, checks the heart’s beat-to-beat variability and can use that information to detect early signs of infection and other problems. The Liverpool unit’s team of doctors and nurses can then respond to the baby and start treatment much earlier than they have previously been able to do, reducing infant mortality by more than 20 per cent.

It is estimated that HeRo will save about five to seven babies a year at Liverpool Women’s where every baby in the Intensive Care and High Dependency units will be placed on the monitoring system which is connected to the heart bedside monitor in each room.

The system analyses the infant’s heart rate variability continuously and generates a digital score from 0 to 7.  If the heart rate demonstrates cause for concern, the score rises. Scores above a 2 start to draw attention to a potential problem. 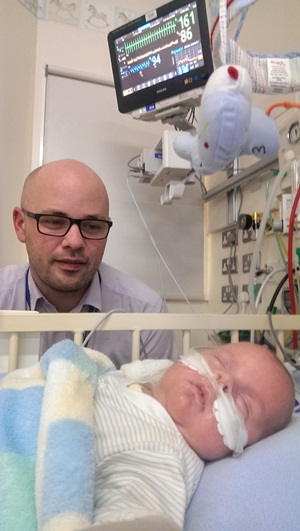 Heading the project is the Trust's Consultant Neonatologist Dr Chris Dewhurst. He has spent several years researching these subtle heart rate changes and been in consultation with the University of Virginia where the HeRo system was developed and with Virginia’s Vanderbilt Hospital which took part in a six year trial. This showed that HeRo can reduce mortality by more than 20 per cent.

Said Dr Dewhurst: "We are the first Neonatal Unit in England to introduce the HeRo system as part of our infant monitoring system. Here at Liverpool Women’s we have a proud tradition of innovation and research and it is part of our ethic to achieve the best outcomes possible for our babies.

"I spent several years' research in this area, investigating the subtle changes in the heart rate seen before any clinical deterioration becomes apparent. I know the team in Virginia who developed this system which has been described as 'the voice for infants who can’t speak for themselves.’ It enables NICU doctors and nurses to get to the right bedside at the right time. We are currently discussing how we can work with the Virginia team in the future to develop future monitoring systems."