Community midwives Rachel Mavers and Amy Kelly from Liverpool Women’s Hospital found themselves attending their most amazing home birth yet when they delivered baby Michael Mansfield – her sixth son - into the arms of his mother,  Andrea, at her Melling home on December 6th. 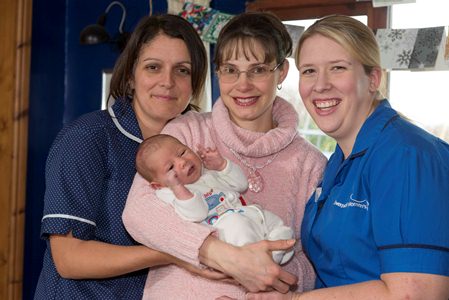 For at the same time, American midwives were supporting Andrea’s sister, Audrey Westich, who was also having a home birth in Pennsylvania, USA. Audrey gave birth to her son, Levi, nineteen minutes before Andrea gave birth to Michael in what was her second home birth.

Says Andrea: "We had been comparing notes and our bumps on Skype all the way through the pregnancy and joked that it would be funny if we gave birth on the same day. This happened because Audrey was five days late and I was two days early. We are going to call our boys Cousin Twins."

Crowding round  to see the new arrival with Dad, James, were Andrea’s other five sons,  Elijah, 7, Stephen, 6, Daniel, 5, Joshua,  and 12 month old Benjamin. "I always  wanted a bunch of boys,” says Andrea whose mother, Helen, was in Florida at the time and trying to keep tabs on both her daughters as they went through labour. 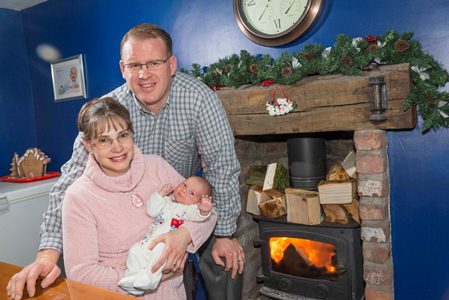 "It was my second home birth in England – my other four boys were born in the USA - and the midwives, Rachel and Amy were fantastic.  It was definitely more relaxing to give birth at home in my own bed."

Said Rachel Mavers, Leader of Liverpool Women’s award-winning Maple Team of Midwives who are based in Kirkby: "Nothing like this has ever happened before at any of my home births. Andrea and her sister were sometimes Facebooking each other during their labour.

"Thousands of babies were being born that day all over the world but it was amazing and a privilege to feel connected to these two related babies being born at home in two different countries.  As a midwife, it is humbling to think you are just one of many midwives all over the world caring for women in labour at home."