Liverpool Women's is the first hospital in the UK to introduce bedside neonatal care for all births – even for babies that need resuscitation. 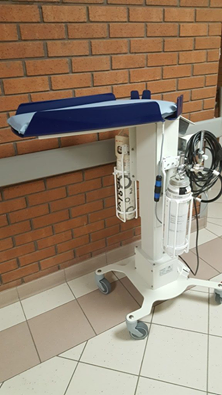 Previously, newborn babies who needed help with breathing straight after birth had to be taken away from their mothers to a large resuscitation unit. The new LifeStart trolley, developed in Liverpool, allows the newborn to be looked after at the mother's bedside.

Until recently, when babies were born needing immediate resuscitation, doctors had to cut the cord early to take the baby away to help them. But that prevented the newborn from getting a third of its circulating blood - which comes from the placenta in the minutes after birth - and is upsetting for the parents. However, the LifeStart trolley has been developed and tested in Liverpool, and allows the baby’s initial care to be conducted at the bedside without cutting the cord. 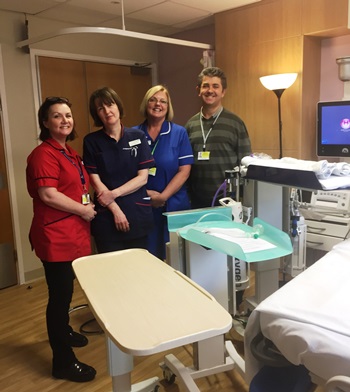 Gill Houghton, Consultant Midwife at Liverpool Women’s said: “We are very proud to be the first hospital to introduce this new trolley to our care. It will make a major difference for these tiny, vulnerable babies.”

In 2012, the Trust was one of the first in the country to introduce deferred cord clamping (cutting of the cord) for both normal and caesarean births. The LifeStart trolley now allows this to happen with all births, including very premature babies and those needing immediate resuscitation.

Dr Bill Yoxall, Consultant Neonatologist said: “The studies that we have conducted show that this is very popular with mothers. The last thing that mothers want when a very vulnerable baby is born is for it to be taken away from them. The LifeStart trolley allows them to stay with their baby at this critical time immediately after birth.”

Professor Andrew Weeks, Consultant Obstetrician at Liverpool Women’s, produced the original LifeStart trolley designs, which were initially based on the simplicity and mobility of a bedside trolley, commented: “This is a major advance for neonatal care. Most babies who are ‘resuscitated’ immediately after birth need very little care – maybe just a little oxygen. To take babies away from their mothers to do this is unnecessary and unfair. The LifeStart trolley allows whatever care is needed to be done right alongside the mother. It’s better for babies and better for mothers.”

The LifeStart trolley is small, mobile and adjustable. The resuscitation surface is horizontal and keeps the baby warm with a neonatal warming mattress. This allows the body temperature of the baby to be maintained during treatment on the trolley. Additional equipment can also be mounted on two configurable rails.

Three of the trolleys have been provided by our fabulous fundraisers, Toyah Stuart and Nigel Crawford, Sofia’s Rainbow and Ickle Pickle, at a cost of £5000 each.

Jodie Fitzpatrick, who was the very first patient to have access to the LifeStart trolley after giving birth to baby Louie who was premature at 29 weeks, commented: “I’ve had pre-term babies in the past and one of the most stressful moments is when the baby is first taken away from you. I am delighted that tiny babies can now be cared for right at the bedside.”