Liverpool is unique for neonatal services because babies are born in one hospital, Liverpool Women’s, but if they need specialist services those are provided in a different hospital, Alder Hey. We have been working to develop a neonatal unit on the Alder Hey site for the last several years with a plan to open the unit in 2022/3.

Two weeks before the lockdown we held an event with Dr Jennifer Fang from the Mayo Clinic talking about neonatology telemedicine and demonstrating how it worked in Minnesota.

If this event hadn’t happened I doubt we would have introduced our telemedicine service, we would have thought it was too much, too hard, too alien.

It was Jo Minford’s and my idea to have the event. Alder Hey and Liverpool Women’s Hospital are very innovative and we had heard about the Mayo Clinic neonatology telemedicine; we weren’t sure where it would lead but thought it would be helpful as there a lot of babies, and healthcare staff, travelling around the region, to meet face to face for clinical consultations. We thought it would be interesting to see if we could use telemedicine to work differently.

The key people in organising it were surgeon Jo Minford and Lead Advanced Nurse practitioner Simon Minford at Alder Hey, and myself at Liverpool Women’s Hospital.

The event happened after I had a meeting with locally based Ed Percy of Intouch Health, who introduced us to Jennifer. I played with the system on Ed’s telephone in a Costa Coffee and thought this is absolutely brilliant, I want to see more of this.

Ed’s sister and niece are both midwives at the Women’s Hospital which is why he approached me.

We invited neonatologist Dr Jennifer Fang from the Mayo Clinic on the Monday, just as COVID was building up. On the Friday I left to go on two weeks’ leave. As I left I said to my colleague Dr Fauzia Paize, ‘get that telemedicine system in because we are going to need it, we are going to have a lot of trouble with staffing; I don’t care how you get it, we can sort the funding out later’.

Over the next week we rewrote a rota that included five or six who were fit and well but at home self-isolating. We set them up to be able to provide a full workload from home using telemedicine, which meant that we could provide a similar level of consultant oversight across two sites, within a week.

In Alder Hey we have a surgical ward with nine cots for babies with surgical needs and at the Women’s we would usually have three or four consultants on site each day and we dropped that to two, with one working from home who covered both Alder Hey and the Women’s.

They did a ward round in the morning at the Women’s and then a ward round at Alder Hey late morning. They provided support to the postnatal ward and to the foetal centre if needed; having discussions with families – all through telemedicine from home.

Usually when we do antenatal scans which need specialist input, the surgeons, cardiologists and foetal neurosurgeons would travel from Alder Hey to the foetal clinic at Liverpool Women’s but with COVID that travel had to stop.

With the telemedicine, surgeons can dial in from Alder Hey and see scans in real time and in the near future we will be doing that with cardiologists; the next stage is with the neurosurgeons.

We use a very sophisticated camera at the Women’s; it has an electronic stethoscope on it and a telephone so you can have a private conversation rather than through the camera; it can connect to the cardiac scanner (echocardiogram) machine, ultrasound scanner or video laryngoscope. The screen is clear and you can control the camera view and zoom.

The most impressive part was the speed at which it happened, from zero to up and running in just two weeks, from having never done it before to running a full telemedicine service.

The InTouch system demonstrated by the Mayo Clinic is used for resuscitation; if a baby collapses in a peripheral hospital they can have a neonatologist online to provide immediate support. This wasn’t our immediate need, but it showed what we could do with it.

The timing was spot on. The event happened on the Monday and I left on the Thursday and by the time I got back, the camera was on its way, we were being trained, we then trained everyone else and we were up and running.

What’s been really interesting is seeing how different people respond to the COVID situation.

Some people want to go into their shell and say ‘we need to do what we’ve always done’ and some people want to think about different ways of doing stuff. A few of us have cut out the red tape and just got things done.

I think the reason it has worked so well, and this is always my view with technology, is it has to be really simple at the user end - and this thing is. It’s a bit like having Google on your phone, it just does things automatically, tells you where you’ve parked your car or how far you’ve walked, you don’t have to press stop and go.

When something is really complicated and you have five different log-ins, have to learn how to use software and navigate an unusual way of working, it won’t happen. This takes just 15 minutes of playing around with it and you know what you’re doing.

My experience in the health service is that you have to get a ‘yes’ from everybody. You can have ten committees where ten people in every committee agree but one person in the tenth committee disagrees and it goes back to square one.

There are risk-averse individuals who want everything to be 100 per cent assured before it’s ok to go and that can put stoppages in place.  People always want SOPs (standard operating procedures) – but you wouldn’t need an SOP to use a phone and this is exactly the same.

We haven’t had to go through those ten committees, we have had direct access to the people who were important to say yes, mainly the CCIOs (chief clinical information officers) at Liverpool and at Alder Hey.

I was saying we need this in 48 hours and we had the support of these key people who were brave enough to say yes and press that final button.

But we have had some negative responses - I have had an email this morning from someone putting barriers in place rather than looking at where we can get to with this.

One of the important enablers is to have the right champions; Simon Minford was the lead at Alder Hey; we needed EBME (biomedical engineers) guys to make sure that we could sort out the equipment; and we needed the IT leaders and CCIOs to sign off that it was good to access the wifi and go through firewalls.

Then you need a group of enthusiastic individuals who are up to the challenge, mainly the end users, in this case the surgeons and neonatologists. If the end users don’t want it, it won’t work.

In the first telemedicine ward round, there was a dad and baby plus neonatologist in Liverpool Women’s and a surgeon on camera link from Alder Hey; plus the mum was self-isolating at home and on a FaceTime camera, so there were two virtual people in the meeting and we were making decisions about a baby.

Now it’s up and running, no one will say stop doing it. It’s very easy to stop something which hasn’t yet happened, but now it’s working really well it won’t stop.

The biggest issue we have had is wifi in certain areas of the hospital; we have been able to get round it but it has been annoying at times.

It is still early days; we are now looking to see if we can roll it out in other departments of the hospital and also starting to talk to the wider neonatal network, where they deliver babies and sometimes unexpectedly the babies are unwell and clinicians will call you after the initial stabilisation period. Like the Mayo Clinic, we want to be able to offer instant support for resuscitation, but that will be up to the individual trusts.

Telemedicine is here to stay. The virtual medicine role has been massively important to us and we’re thinking about how we can continue that for people who for any reason can’t travel into work.

If we are going to staff two hospital sites with neonatologists we can probably have fewer people by using telemedicine, particularly with providing out of hours cover. 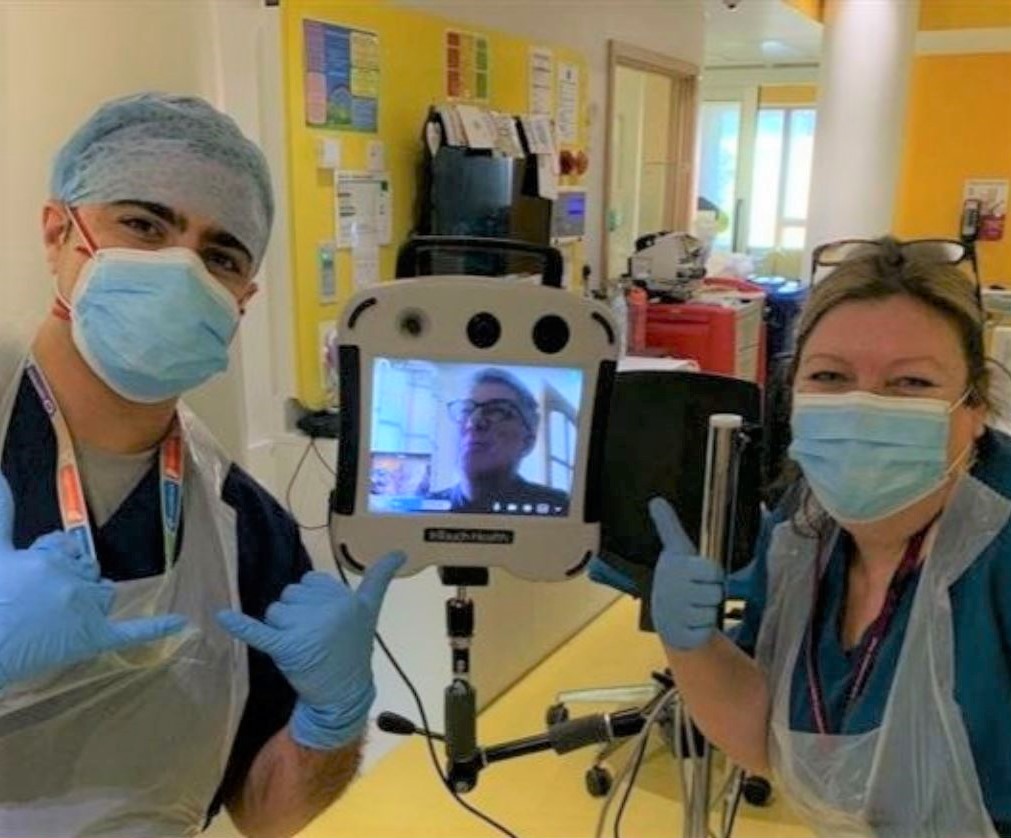